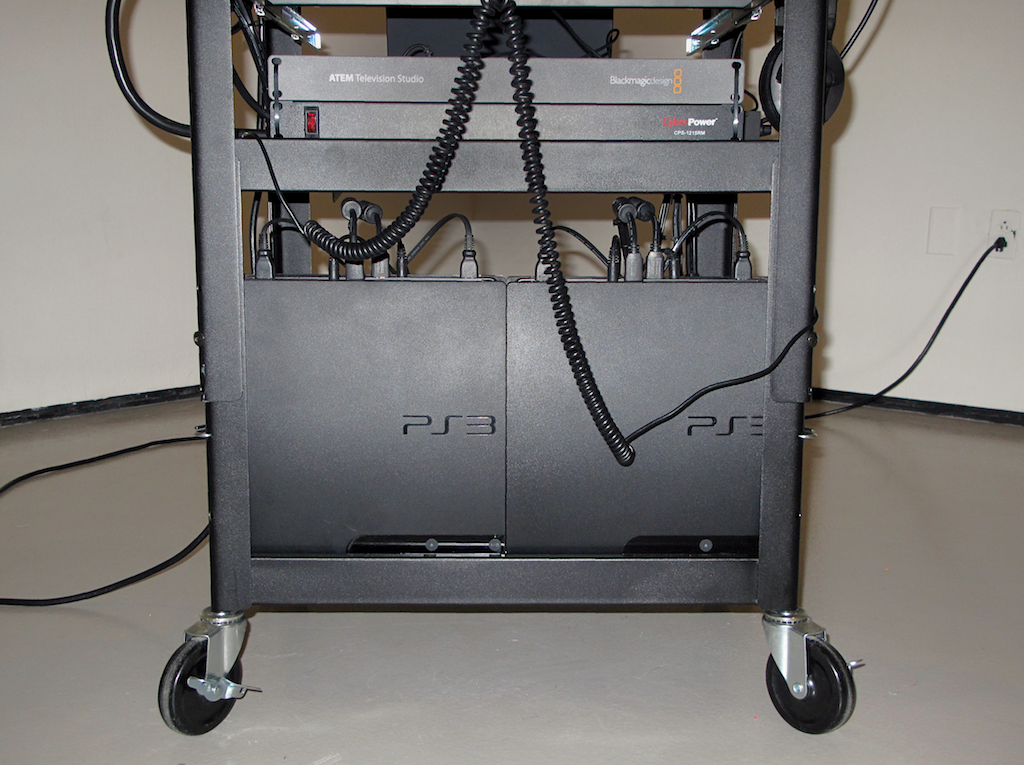 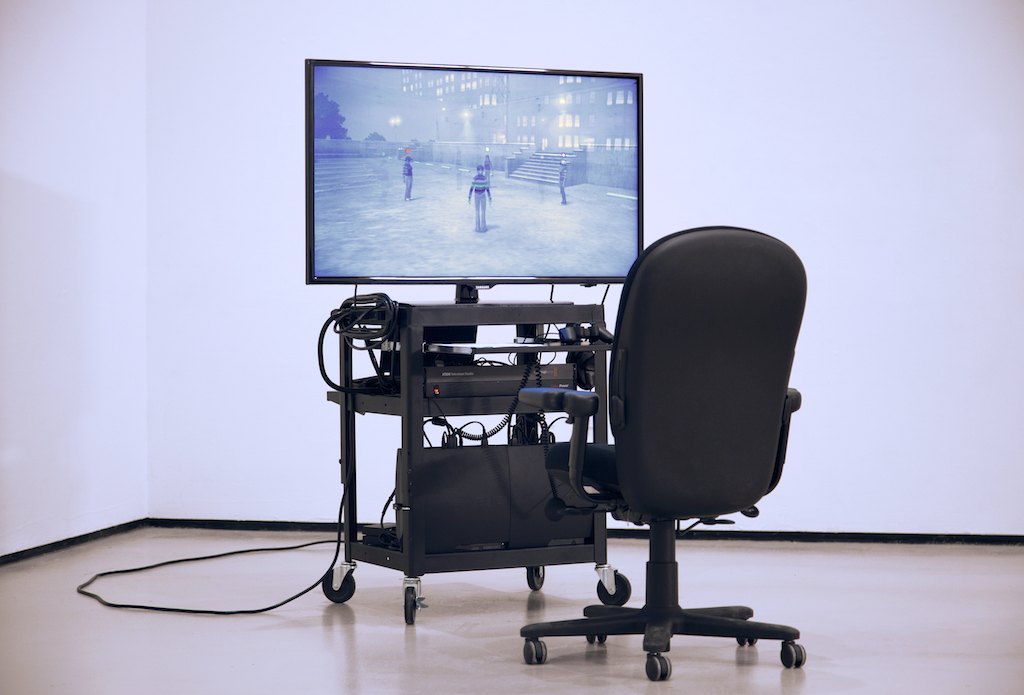 Self-Actualization Replaces the Journey, 2013
This videogame was built from 4 copies of the pre-existing game Grand Theft Auto 4. It consists of 4 Playstation 3 consoles and other electronic equipment. The player operates a game controller whose output is multiplexed; it controls all 4 Playstations simultaneously! The images on the TV slowly fade between the audiovisual outputs of each game in a cyclical fashion. The above video is an unprocessed gameplay recording. (screenshots) A player writes:

"Playing Self-Actualization Replaces the Journey is a mesmerizing and unique experience that challenges ideas of goal-oriented gaming as well as notions of subjectivity and character. The simple act of controlling four disparate characters instead of one is a powerful modification that elevates and creates alternative meanings in an otherwise mass-market game series. While playing I experienced both frustration and enjoyment as my perspective continuously shifted from one character into another. Oftentimes my efforts stemming from a traditional, goal-oriented gaming mindset were met with the return of a previously off-screen character running in place in front of a brick wall, trapped under a small staircase, or swimming in circles in a canal. These seemingly frustrating moments in fact reflect some of the most enjoyable aspects of the game. The elliptical operational logic at work forces the player into endlessly interesting temporal and perspectival shifts as one's subjectivity is never stable or easily measured in this game. I think the complexity of the experience reflects great creativity that is impressively expressed via appropriation and adaptation." 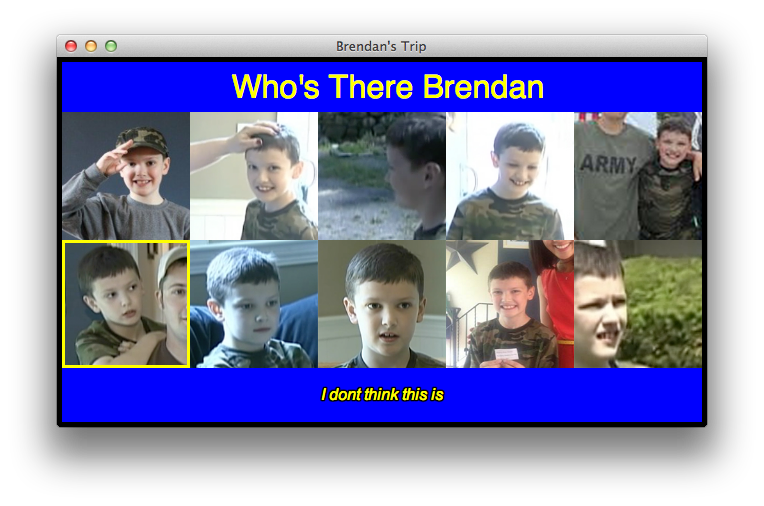 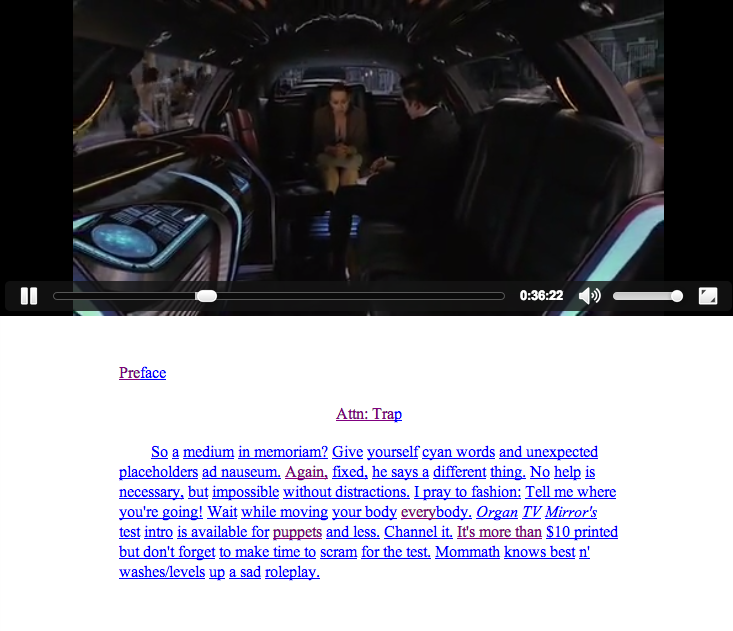 A remarkable hypertextual video essay [for] Parallelograms, has been posted by Jeffrey Scudder. It is composed of an intriguing collections of clips, and includes some fascinating video quotation of (e.g.) Marshall McLuhan, Douglas Rushkoff, Ted Nelson, Alan Kay, and Chris Crawford. Not to mention my colleague Hal Abelson in a wizard hat. Also, I couldn’t help but notice that it shows the 10 PRINT program executing and features a shot of the book A Million Random Digits with 100,000 Normal Deviates.

If these matters at all interest you, do read/watch this video meditation on digital media, society, materiality, matter, the body, and (as I read/watch it) how the computer, whatever its limits, may have still-untapped potential for empowerment and change. [link]

a good net art on Parallelograms this week: http://t.co/JQC8jGKglo


397 Figures, 2010-2012
These drawings were produced in a software program I wrote, called thePRBAT. The software as well as the drawings constituted my undergraduate thesis project at Ringling School of Art & Design. Click inside the above window to load a randomly selected drawing from the set. You may also click and drag to pan the image.

Constellations/Lines, 2012
Above are two video recordings of software animations that run indefinitely. Both were made using an animation tool I wrote called Marker (after Chris Marker). What does the editing interface look like? 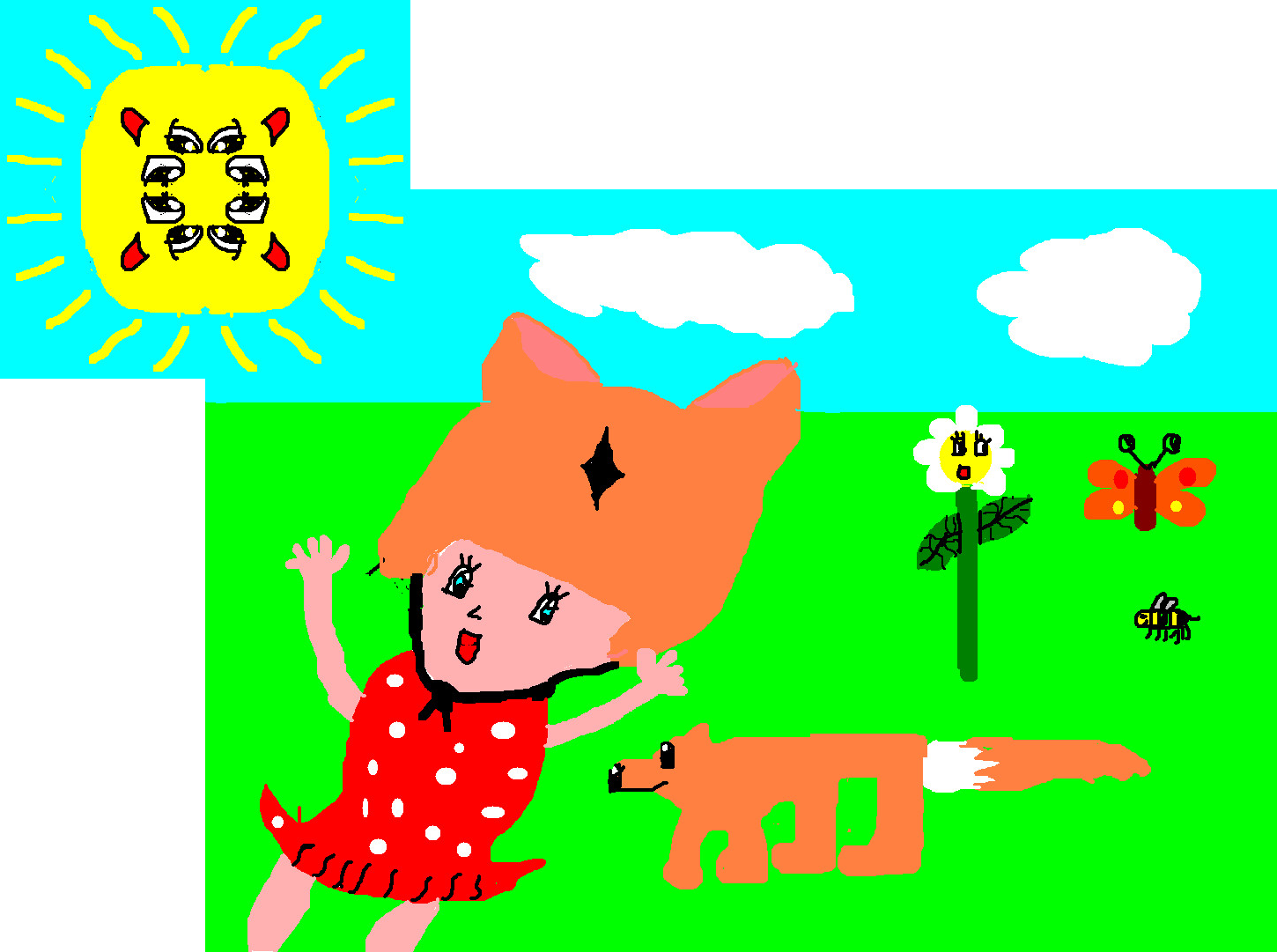 Suncroppings, 2013
First I collected drawings with suns in the corners. Then I cloned and mirrored the Sun in each drawing to complete its representation and extend the picture plane. There are 132 drawings in this series. 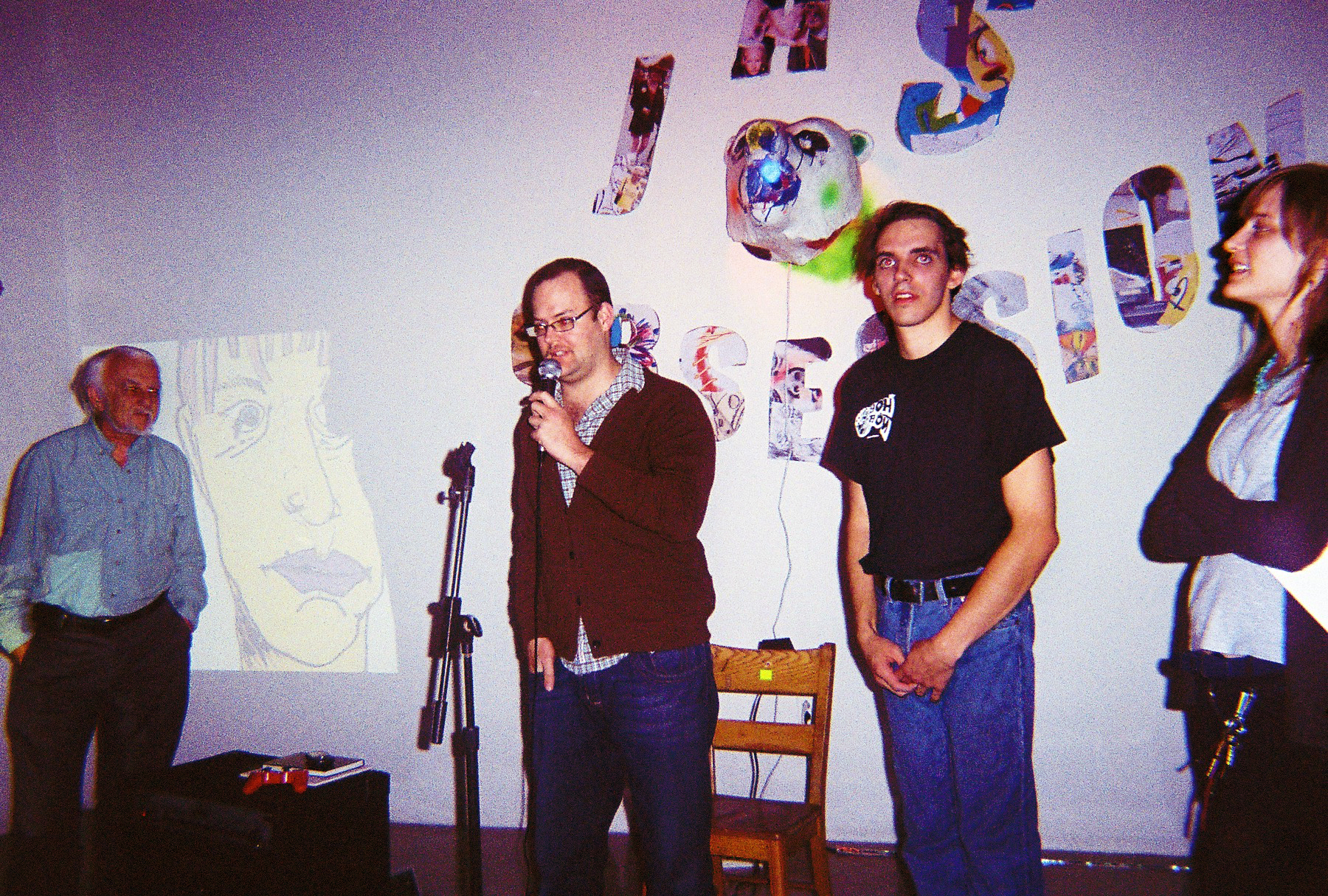 Town Game, 2011
A memory game for two or more players, who take turns singing (in the same melody) the name of a place they have been to. Immediately following, they tell a story of something that they experienced while in that place. Players are encouraged to not think of a story beforehand, and orate quickly. Click here to watch a video explanation and demo.